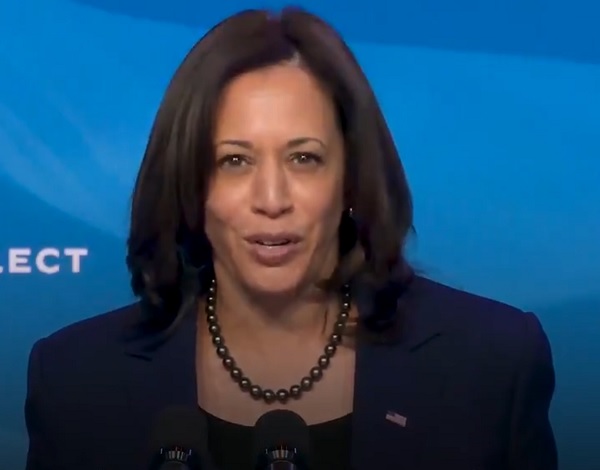 With the White House highlighting Indian Americans as a group that’s thriving in Biden’s America, Vice President Kamala Harris has framed the midterm elections as a referendum on abortion rights and the fight for democracy.

“When democracy is intact, it’s extremely strong in what it does to uplift the people. When it’s intact it protects and defends individual rights,” she said rallying with Illinois Democrats at a “Get Out The Vote” event in Chicago on Sunday.

“It works in the interest of justice and equality and fairness. It’s very strong in that way. The duality is that it is incredibly fragile,” said Harris, daughter of an Indian mother and a Jamaican father, who has spent the final days of the race in Democratic strongholds.

In Chicago, Harris first spoke to a small audience of the state’s most prominent Asian American politicians and candidates and then at a Chicago event with the Asian American and Pacific Islanders Victory Fund.

Meanwhile, according to a Washington Post report the White House has been highlighting Indian Americans as a group that’s thriving in President Joe Biden’s America

“Ahead of midterm elections that could be decided by razor-thin margins, Democrats are hoping to capitalize on some of the optimism felt by Indian Americans, a growing and increasingly vital bloc of voters,” it said in a report last week.

“At a time when many Americans are anxious about the economy and believe the country is on the wrong track, the president’s aides and supporters have pointed to the rising prominence of Indian Americans inside and outside government as an example of a group that’s thriving in Biden’s America,” the Post said.

Among Asian Americans — who make up the fastest-growing slice of the electorate — Indian Americans are the most Democratic-leaning and among the most politically active, Shekar Narasimhan, a Democratic fundraiser, was quoted as saying.

Like all Americans, Indian Americans are focused on pocketbook and quality-of-life concerns ahead of the midterms, said Narasimhan who leads a super PAC focused on turning out Asian Americans, Native Hawaiians and Pacific Islanders, citing polling by his AAPI Victory Fund.

The group has not been insulated from the rising cost of living and general sense of economic unease, he told the Post, expressing concern that voters may sit out this election or support Republicans.

South Asian Americans are not a monolith and represent all sorts of religions, economic classes and political leanings, and Republicans are also courting their votes, the Post noted.

With nearly four million people of Indian descent in America, the community is now primed to “punch above its weight” when it comes to politics, as it has in other spheres including business and science, Narasimhan was quoted as saying.

Upward of 70 percent of Indian American voters cast ballots for Biden in 2020, a year when Asian American turnout soared and both parties campaigned heavily for the group’s votes, according to the Post.

“In 2020, for the first time, people paid attention,” Narasimhan told the Post, and the upcoming midterms give Democrats a chance to make the case to Indian Americans that they have delivered on their promises.

While Biden has received low marks for his stewardship of the economy, Asian Americans view him favorably for his commitment to diversity and representation within government, Narasimhan said.

There are more than 130 Indian Americans in senior roles across the administration, with several serving in high-ranking White House positions that have never before been occupied by a person of color.

“There is an enormous amount of attention being paid to the Indian diaspora,” he was quoted as saying. “Evidence of that is just the breadth of the people in the White House and in the administration who are Indian American. They cover every issue from labor to civil rights to foreign policy to economics.”

Politicians are increasingly turning to the Indian diaspora for donations as well, as the group becomes more politically active. Indian American donors gave $20 million to $30 million to political candidates from both parties in 2020 — a record for the community, Joshipura said.

In Michigan, Pennsylvania and Georgia, where some recent statewide elections have been decided by margins of less than 0.5 percent, Indian Americans account for a larger share of the population than the difference between the candidates, census records show.

Indian Americans are paying attention ahead of the midterms, though it’s not clear how much the economy — the top concern for voters — will dampen turnout, Narasimhan said, pointing to polling and phone bank work his group has done. Immigration, crime and education also rank as top issues, he said.

The increasingly fierce battle between the parties for Indian American voters signals that the group has become indispensable to the country’s politics, Narasimhan told the Post.