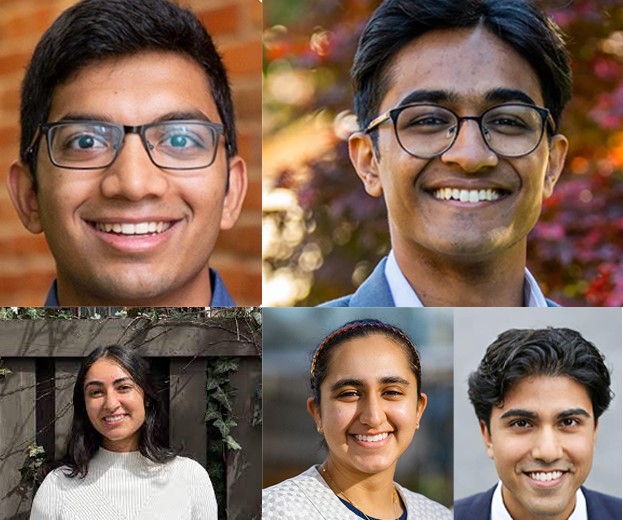 Five Indian Americans, including two women, are among 32 Americans chosen as Rhodes Scholars to pursue graduate degrees across social sciences, humanities, and biological and physical sciences at Oxford University, England, from October 2023.

Read: Four Indian Americans among 32 Rhodes scholars from US (November 24, 2020)

This year’s Rhodes Scholars from the US “inspire us already with their accomplishments, but even more by their values-based leadership and selfless ambitions to improve their communities and the world,” said Elliot F. Gerson, American Secretary of the Rhodes Trust.

Rhodes Scholarships provide all expenses for two or three years of study at Oxford and may allow funding in some instances for four years.

Gerson called the Rhodes Scholarships, “the oldest and best-known award for international study, and arguably the most famous academic award available to American college graduates.”

Hallur, is a senior at Duke University with majors in Statistics and in Public Policy. Already recognized nationally as an advocate for individuals with autism, Hallur has interned at Department of Health and Human Services and the Centers for Medicare and Medicaid Services, and has done research at Harvard Medical School and Duke.

He is co-president of the Duke Disability Alliance and co-director of Disability Policy for the Duke Student Government. He was elected as a junior to Phi Beta Kappa, and has supported Arizona’s Medicaid efforts for over two years. Hallur plans to do the MSc in Medical Anthropology at Oxford.

Gupta is a senior at Georgetown University, where he is majoring in Science, Technology, and International Affairs. Gupta’s work engages the intersection of international development and digital technologies.

He has interned in the State Department’s Office of West African Affairs and plays lead trumpet in the Georgetown University Jazz Ensemble. He also writes, edits, and publishes a weekly newsletter on film, television, and media. At Oxford, Gupta intends to do the MSc in Social Science of the Internet.

Sangha is a senior at Yale College with majors in Computer Science, Statistics and Data Science. He has excelled across multiple disciplines in his motivation to explore how artificial intelligence can revolutionize health care.

Sangha has four peer-reviewed journal articles, including a first author publication in Nature Communications, and a patent relating to hidden cardiovascular disease. Sangha has also been active in the delivery of public health services, including hypertension screening. He will pursue a DPhil in Health Data Science at Oxford.

Kambath is a senior at Harvard College where she majors in Social Studies. A Truman Scholar, she is passionate about criminal justice reform.

She was President of the Harvard College Project for Justice, co-chair of the Policy Program at the Harvard Institute of Politics and interned at the NAACP Legal Defense and Education Fund.

Kambath heads the Program in Engaged Scholarship at the Harvard Kennedy School. Amisha intends to do the MSt in English (English and American Studies).

Singh is a senior at the Massachusetts Institute of Technology where she majors in Chemistry. Her academic work has examined the biochemistry of human innate immunity and microbial pathogenesis.

While at Oxford, Singh will pursue the MSc in Evidence-Based Social Intervention and Policy Evaluation.

The total value of the Scholarship averages approximately $75,000 per year, and up to as much as approximately $250,000 for Scholars who remain at Oxford for four years in certain departments.