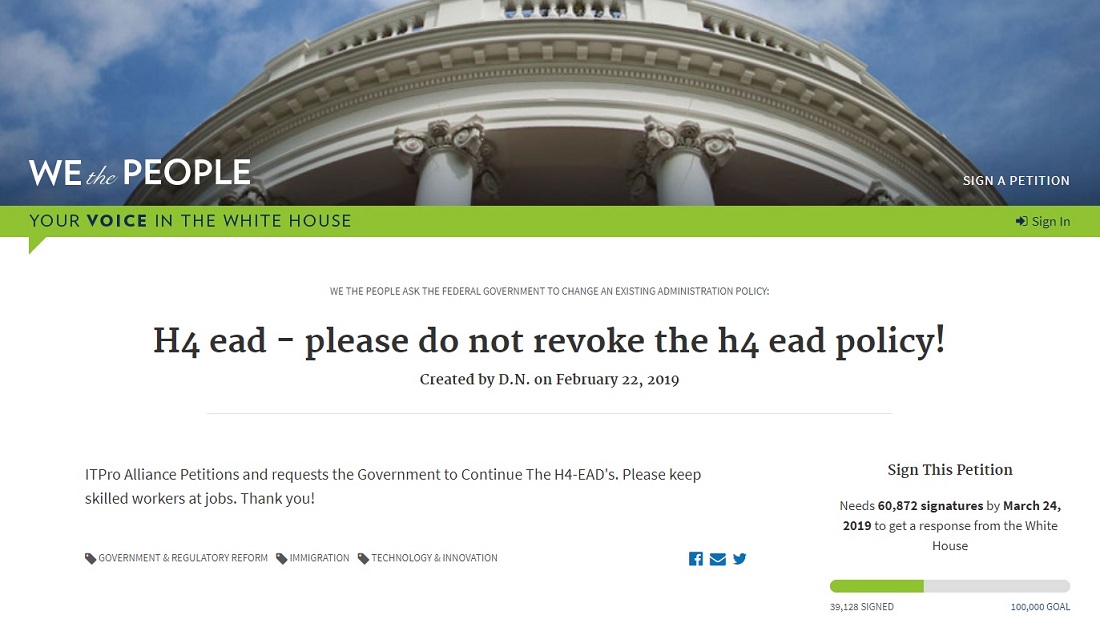 The goal is to acquire at least 100,000 signatures, which will force the Trump administration to respond.

The Trump administration’s attempt to end work permit for H4 visa holders has raised serious concerns amongst tens of thousands of H4 and H-1B visa holders. Ever since the Department of Homeland Security (DHS) sent a draft rule to the Office of Management and Budget last month, these visa holders have been attending rallies, visiting support groups and consulting with lawyers on what may be the next step for many who have gained employment through H4 EAD in the United States.

Late last month, a petition was launched on the White House website requesting the US government not to revoke the H4 EAD. The petition, titled “H4 EAD – Please do not revoke the H4 EAD policy,” was started by IT Pro Alliance, a non-profit trade group of information technology professionals across the United States.

RELATED: What’s next for H4 EAD holders? Congressional action may be the solution, say lawyers (February 27, 2019)

The new Jersey-based Alliance, which has chapters across the country, believes that the petition will compel authorities to take notice of the potential serious repercussions of scrapping the H4 EAD.

The right to petitioning the government is a right endowed on everyone in the country by the First Amendment of the United States Constitution. On the White House web platform, “We the People” where anyone can create a petition online on any issue. One can then share it, and collect signatures. If 100,000 signatures are gathered in 30 days, the petition will be reviewed by the authorities and would make sure that the issue will be brought before the appropriate policy experts, mandating an official response.

By 1 pm EST on Monday, the petition, which was started on February 22, had received 39,149 signatures, meaning it would need nearly 61,000 more signatures to get an official response from the administration. “We are hopeful that if everyone understands and signs the petition we can get much more than 100,000 signatures, even to the tune of 300,000 to 600,000 if all the current, aspiring H4 EAD applicants as well as their spouses and those who have been through the H-1B to Green Card route, too, were to sign the petition,” Dan Nandan, an official of the IT Pro Alliance, told the American Bazaar.

However, Nandan said that many Indian H4 EAD holders are still cagey about giving out their names or email IDs, as they are fearful of retribution. “This irrational fear has led to many not coming ahead and signing the petition,” he said.

Asked how the American work force and the immigration process will be affected if the H4 EAD is revoked, Nandan said: “I believe the revoking of H4EAD may lead to a bigger mess. Already many of those who are on H4EAD are trying to apply for H1B to secure their jobs. Now, if most of the Indians on H4EAD were to do that, we would already have enough applicants who are currently in the US to apply for H1B thus curtailing the chance of any new Indians coming to the US.”

And this may not be the only impact, as experts also say that a lot of H4 EAD workers have also floated companies where they are employing US citizens. Once their work permits are revoked, those Americans would end up losing their jobs, too.

There is a widespread discontent amongst the H4 community and many feel that they are unfairly targeted. “H4EAD is a ray of hope for many,” Netra Chavan, who has been actively campaigning for rights of H-1B and H4 visa holders, told the American Bazaar. “Every immigrant organization is trying to save this rule. The petition is also an effort to save it and every non-immigrant Indian must sign it. The petition is on a government website and if it gets 200,000 signatures then it be more visible.”

Chavan added that the this country needs to understand that H4 EAD holders are hardly taking away any American jobs, contrary to popular perception. “H4EAD card is a boon for many H4 spouses and they are not competing with anyone but just trying to help themselves economically,” she said. “It’s unfair to take away the right to work from an able individual. Whether they choose to work or not should be their prerogative.”

Supporters also said that by taking away the work permit from H4 visa holders, the Trump administration may, in fact, further strain the American economy, as well as the immigration system. “For those who have been making an income on H4 EAD the removal would come as a bitter pill,” Nandan said. “Many of them have purchased assets such as houses and suddenly being on single income would create a financial dent for many families. We also anticipate that many of those affected may also look at then opting for a F1 visa that would allow them to work. Which would again create another mess in that category.”

Many supporters of H4 EAD argue that the number H4 visa holders who are working at the moment is miniscule. Not all H-1B spouses get the work permit and eventually those who do would be getting their Green Cards in a matter of few years. “We do not see more than 100,000 to 150,000 H4 EAD holders in America, every year,” said Nandan.