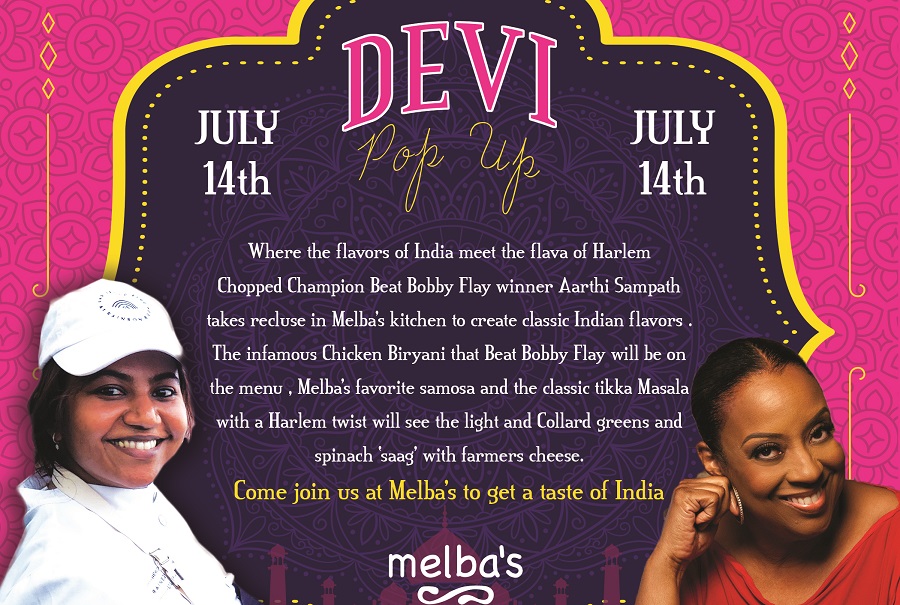 The Devi Pop Up at Melba’s restaurant is billed as flavors of India meeting “the flava of Harlem.”

That the New York City shares an enviable position across the world for its commitment to world cuisine is a common knowledge. It is also in the Big Apple that one gets to see a unique marrying of cultures through food. So no wonder then that this weekend a food mash up is happening.

If that hasn’t gotten you riveted yet, then hear this: The first ever Indian chef to win the US food reality show Chopped, Aarthi Sampath, is organizing a food pop up along with popular New York restaurateur Melba Wilson at Wilson’s eponymous eatery Melba’s.

Michelin starred chef Sampath, winner of the season 3 of Chopped in 2016, is also the winner of another hugely popular food show, Beat Bobby Flay last year. Currently the chef de cuisine at iconic Michelin starred eatery Junoon in the city, Sampath would bring along some of the most unique Indian flavors she grew up with.

Aptly titled as “Devi Pop Up”, perhaps as an ode to Sampath’s Indian roots and culture, the food fest would feature dishes such as Sampath’s famous chicken biryani that beat none other than Bobby Flay himself.

Chefs Sampath and Wilson describe the pop up as flavors of India meet the flava of Harlem, where Melba Wilson was born and grew up.

Also on the menu will be Melba’s favorite samosa and classic tikka masala, with a Harlem twist. There will also be collard greens and spinach saag – another Indian homey comfort food.

So, if you are in a mood to try some lip smacking Indian flavors do check out what looks like an interesting food mash up.