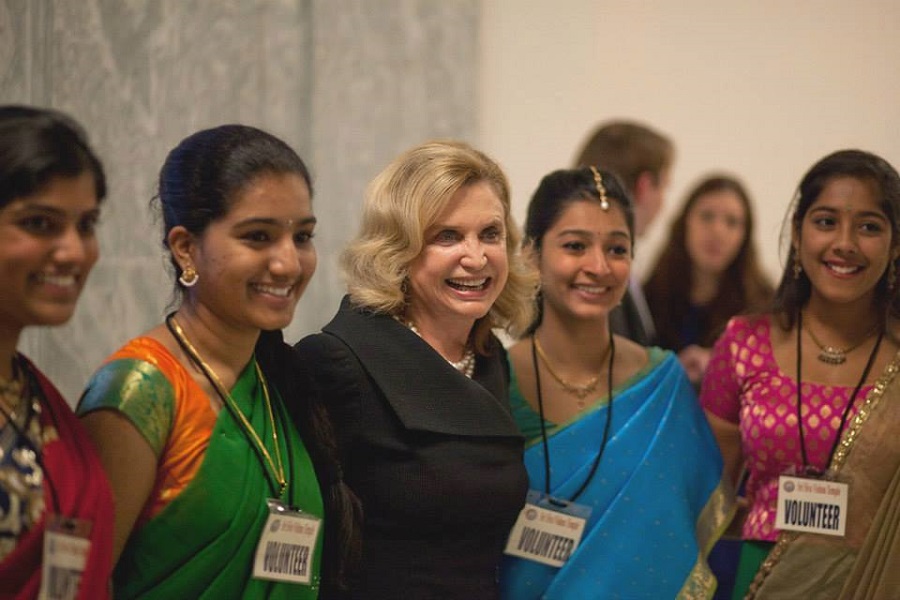 Ahead of the sparkling festival of lights, influential members of the US House of Representatives unveiled legislation that would make Diwali a nationally recognized federal holiday.

Flanked by colleagues in Congress, Democrat Carolyn Maloney of New York announced the introduction of the Deepavali Day Act on the eve of the festival of lights celebrated by Hindus, Sikhs, Jains and some Buddhists all over the world. Looking on were Indian-American community activists who braved a cold morning in early Fall to witness the historic event held in the Rayburn House Office building on Capitol Hill.

“I am very proud to celebrate with you the victory of light over darkness, the triumph of good over evil, and the pursuit of knowledge over ignorance as we do every day”, Maloney told the gathering. “It is truly appropriate that Diwali this year symbolizes our nation’s continuing journey out of the darkness of Covid-19 and the terrible effects that the pandemic has had on the people of our nation”.

The lawmaker who chairs the powerful House Oversight and Reform Committee noted, “Celebrations like Diwali speak to the core of what we all desire our nation to be: a beacon of happiness, healing, learning and light in uncertain times. There is no better time to enshrine Diwali as a federal holiday than in the wake of this terrible, dark pandemic”, she affirmed.

“It’s very appropriate that the world’s largest democracy and the world’s oldest democracy are such good friends and allies”, said the legislator, a staunch supporter and tireless advocate of strong India-US ties.

In September, Maloney re-introduced a bill, HR 5022, to posthumously award a Congressional gold medal to Mahatma Gandhi in recognition of his contributions to the nation by the promotion of non-violence.

On Wednesday, she told the gathering on Capitol Hill, “We must go even beyond and continue efforts in Congress to enshrine that the significant cultural contributions of Indians and the Indian-American community are given honor and the importance and respect as appropriately as any that have come before in our 200-year history. Now, it is time to grant the festival of lights, and by extension our Indian-American community, the recognition it so rightly deserves by having Diwali observed”, she said. “It is a testament to the incredible cultural vibrance, intellectual leadership, contributions of the Indian-American community to the United States. It deserves recognition as a federal holiday”, she underscored.

On hand at the unveiling of the historic Act was Congressman Gregory Meeks, chairman of the powerful House Foreign Affairs Committee (HFAC), about who Maloney pointed out, “his leadership will be critical in passing this bill”.

A fellow Democrat from New York, Meeks thanked the congresswoman “for her hard work, her diligence, her vision of who we are as Americans and the diversity that we have in our great nation. She is doing this because it is the right thing to do, to make sure that we are celebrating Diwali, light over darkness which is what we are about — history and culture of individuals who have come from India and are now great residents and citizens of the United States of America. And what the United States is it’s about the collectiveness of all of us, the acknowledgment of all of us, the celebration that we should all share collectively together the lighting of lights. That’s what this is all about”, he said.

Speaking for his colleagues on the HFAC, Meeks pledged, “We will be supporting this bill, advocating and moving forward”.

Congressman Raja Krishnamoorthi noted, “Diwali is about celebrating the holiday, but it is also about celebrating Indian-Americans”. The Illinois lawmaker is among four Democratic members of Congress who trace their roots to India, along with Ami Bera and Ro Khanna of California, and Pramila Jayapal of Washington.

Referring to the 4 million Indian-Americans, he told the gathering, “like my family many of you came to this country with nothing in your pockets or very little. But, because of your education, your culture and your work ethic, you have now become some of the most successful people in the greatest country the world has ever known: the United States of America”. He added, “You have become the pride of one of the greatest civilizations of the world: India”.

“Every year, I join more than 6 million Americans in celebrating Diwali, a festival of lights, signifying the victory of light over darkness”, stated Khanna in a press communique. “I am proud to cosponsor this bill with Representative Maloney to recognize Diwali as a federal holiday and know how meaningful this will be to many families across the country”, he said.

Dr. Sumita Sengupta, author, educator and community leader based in New York, urged the House and Senate “to pass this landmark legislation allowing all Americans and future generations to come to be able to observe this important holiday as it signifies the democratic values of light and truth triumphing over darkness and untruth as well as strengthening the bonds between the citizenry, families and communities across our nation”.

Uma Sengupta, District Leader at Large in the Queens borough of New York, told the gathering, “As the first Indian-American elected official in the state of New York, I understand the importance of communities being able to celebrate the festival of lights freely and through the passage of the Deepavali Day Act, all Americans will be able to fully observe the holiday without discrimination or persecution”.

“Diwali, the festival of lights, is recognition of the light within all of us”, said Sanjeev Joshipura, executive director of Indiaspora, a non-profit community of global diaspora leaders, which has been spearheading the annual Congressional Diwali celebration on Capitol Hill. “Observed by a plurality of faiths including Sikhs, Jains, Hindus and Buddhists”, Diwali, he noted, “is an acknowledgment to pursue the good that is there in all of us, and we hope that is a message that can be universally shared”.

It is noteworthy that Maloney led the efforts on Capitol Hill to push the United States Postal Service to issue a commemorative stamp honoring Diwali. She was rewarded for her hard work in 2016 when the USPS released a resplendent Diwali stamp.

“It has become one of the most successful in our nation’s history raising money for the US post office”, the lawmaker told the gathering on Capitol Hill. “Now, I am ready to put the same hard work into advocating, as I did for the stamp, to enshrining Diwali next to Christmas, Memorial Day, Martin Luther King Day, Juneteenth Day, as a federal holiday”, she said.