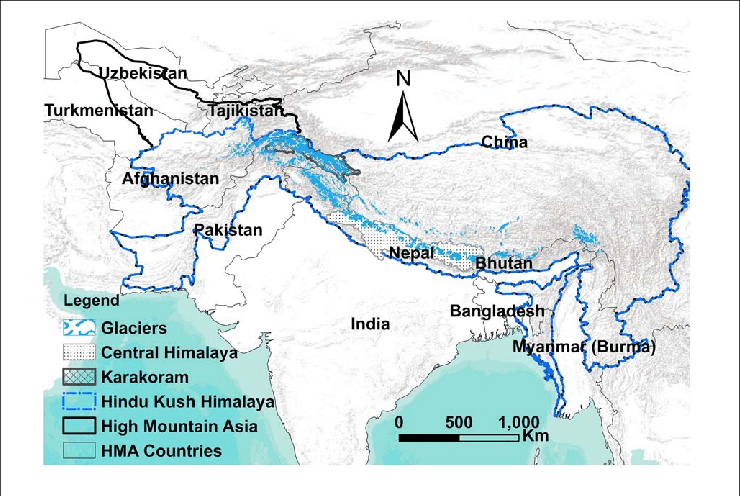 Two Asian giants’ insistence on continued use of coal will have severe implications, especially in their own backyard.

On Nov. 13, the last day of the United Nations climate change conference, COP 26, held in Glasgow, some 200 nations accepted a contentious compromise.

In a dramatic last-minute intervention, China and India forced through an amendment on the continued use of coal. As a result, the Glasgow Climate Pact states coal will be “phased down”—not “phased out.”

Their actions will have severe implications, especially in their own backyard. It jeopardizes the future of Himalayan-Hindu Kush mountain glaciers and small Island nations surrounding them.

It is not rocket science to understand that more than 85% of energy in China and India comes by way of coal-fired power plants.

Using continuous emission monitoring system data, many researchers conclude that China, India, and the USA’s coal-fired power plants are responsible for the largest annual carbon dioxide emissions of all sources of combustion.

The ever-increasing numbers of coal-fired power plants in China and India also contribute sulfur dioxide and nitrogen oxides which contribute to smog and respiratory problems.

It is critical before and after the rainy season (shoulder months) in the region when it supplies a greater portion of the flow in every river from the Yangtze, which irrigates more than half of China paddy fields, to the Ganges and Indus that are important to the agricultural heartland of India and Pakistan.

Chinese scientists have monitored more than 680 glaciers on the Tibetan Plateau and all of them are rapidly shrinking, with the heaviest losses on its southern and eastern edges. Many glacier studies have concluded, “These glaciers are not simply retreating, but they are losing mass from the surface down”.

The ice cover in the southern and eastern plateau has shrunk more than 60 percent since the 1970s and the damage is still greater in central Asia and northern India, with 60 percent declines over the past five decades.

If the current trend accelerates by continuing global and regional climate warming, Chinese scientists believe that 70 percent of plateau’s glaciers could disappear by 2050. Full-scale glacier shrinkage is inevitable by 2070 and it will lead to ecological catastrophe.

Read: Post-Glasgow, India should become a leader in the green energy drive (November 27, 2021)

Asia’s water, in general, is threatened by global and regional warming, but the effect of climate change on water availability and food security differs substantially among different basins.

For example, the effects in the Indus and Brahmaputra basins are likely to be severe owing to large populations and the high dependence on irrigated agriculture and meltwater.

Regional climate warming and monsoonal rainfall increase and an uptick in emissions of black carbon aerosols by coal-fired power plants and stubble burning, brick kilns have a compounding impact.

They are accelerating the melt of ice and reducing the accumulations of snow on these glaciers, leading to a significant loss of ice mass over large portions of mountain regions.

The painful reality is that the world is failing to limit global warming to 1.5 degrees Celsius above pre-industrial levels, despite promising to do so in COP 2015 at Paris.

The pathways even to limit to 1.6 degrees Celsius is tough. The final agreement leaves unresolved the crucial question of how quickly each nation particularly emerging economies should cut its emissions over the next decade.

India pledging to reach “Net Zero” emissions, setting a 2070 deadline to stop adding greenhouse gases to the atmosphere is delusional.

Although China and India are moving slowly towards renewable energy, coal, which provides more than 85% of their electricity, would remain as their main energy driver by the end of the century.

Read: The melting glaciers of Himalaya and Alaska and the global climatic challenges (September 7, 2015)

Black carbon is a short-lived pollutant that is the second-largest contributor to warming the planet behind carbon dioxide. Black carbon is present at geographical locations across the Hindu Kush-Himalaya-Karakoram.

Elevated black carbon concentrations, over the Indo-Gangetic Plain (IGP) and the Himalayan foothills, have emerged as the main contributor of black carbon from both northern and southern sides of the Himalaya.

The Climate Action Tracker (CAT) has rightly cautioned the world leaders despite COP 26 pledges for 2030, the countries will continue to emit roughly twice as much in 2030 as required for 1.5-degree Celsius levels set down in the 2015 Paris Agreement.

Unfortunately, the reality is that the biggest two Asian polluters have deferred their goals to 2070. It sounds good for leaders to claim that they have a net-zero target but they have no plans as to how to get there and their rhetoric with some date is simply lip service to create optics.

In a business-as-usual scenario, increasing energy demands from coal-fired power plants in India and China are increasing the amount of black carbon circulating over Hindu Kush-Himalaya-Karakoram mountain ranges and threatening to accelerate glacier melt exponentially.

The 2.7-degree Celsius scenario by the end of the century will vanish many Island nations and Third Pole (HKHK) will be ice-free.