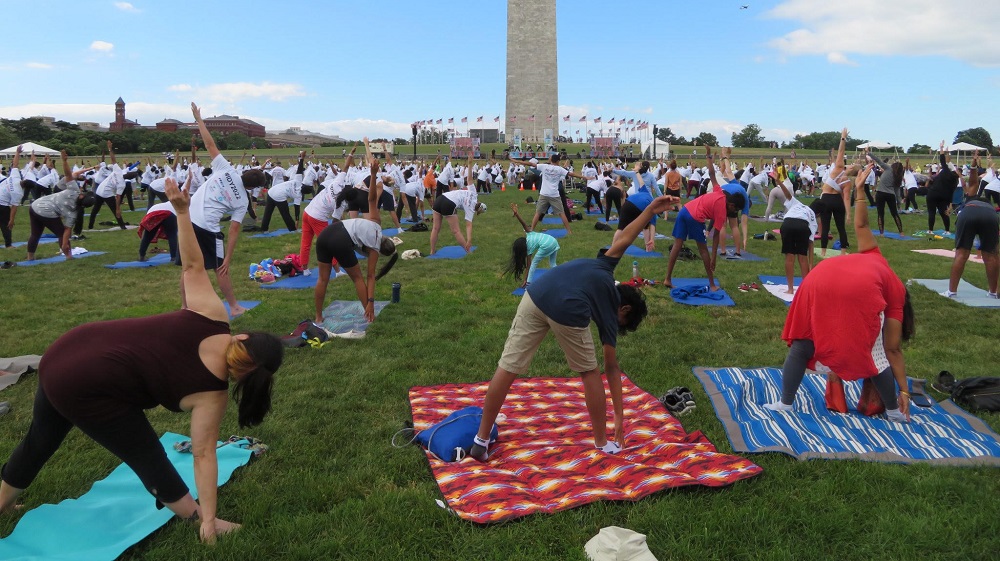 Yoga is an important medium to strengthen people-to-people ties at the core of the India-US relationship, says Indian envoy

Ahead of the eighth International Day of Yoga, the Indian Embassy in Washington, together with Friends of Yoga, organized an inspiring event on Saturday morning in the heart of the nation’s capital celebrating an ancient Indian discipline, now a way of life for many around the globe.

Under a pristine blue sky on a morning which felt more like early Spring than mid June, hundreds of yoga enthusiasts gathered on the grounds of the iconic Washington Monument for the much-awaited Yoga Day program, the fourth such observance at this historic location.

Following two years of virtual celebrations on account of the coronavirus pandemic, it was a refreshing change to attend an event outdoors, inhaling fresh air, which is best suited for this physical, mental and spiritual practice.

Looking around, Ambassador Taranjit Singh Sandhu said he was “delighted to see such a large gathering from various walks of life.” In turn, he was warmly applauded by members of what he described as a “wonderful Diaspora.”

Reportedly, some 37 million people are active practitioners of yoga here in America.

“In the United States, a large number of people have embraced yoga,” Sandhu told an attentive audience. “It’s heartening to see the enthusiasm from pre-K to universities, from public-private sectors, young and old,” he said, noting that yoga studios have sprung up all over the country.

“People-to-people ties are at the core of our bilateral relationship as is being guided by Prime Minister Narendra Modi and President Joe Biden,” said the envoy emphasizing, “We are committed to strengthening this vital linkage and yoga is an important medium.” It is a medium that binds and unites!

“In Sanskrit, Yoga means to join,” Sandhu noted. “Yoga joins an individual with one’s consciousness, with the higher self, with fellow human beings and nature. Yoga is an enhancer – physical, mental, spiritual and intellectual. We require it very much for our well being,” he said.

In recent times, with sedentary lifestyles, a rise in the number of diseases and challenges posed by the Covid-19 pandemic, the envoy pointed out, “Yoga has come into much sharper focus. And now with the post-Covid scenario, Yoga is helping to build resilience, health, unity, togetherness, compassion and happiness.”

It is appropriate that the theme for this year’s International Day of Yoga is ‘Yoga for Humanity,’ a reminder that this ancient practice is truly universal.
“This year is also very special for us,” Sandhu told the gathering. “We are celebrating 75 years of independence, ‘Azadi Ka Amrit Mahotsav,’” he said to much applause.

The envoy recalled how eight years ago, in 2014, Modi had urged the United Nations General Assembly (UNGA) to adopt a resolution for an International Day of Yoga.

Within 75 days, a record for the UN body, the General Assembly declared June 21 as the International Day of Yoga with the overwhelming support of member nations: 175 countries joined as co-sponsors, the highest number for any General Assembly resolution. “Since then, millions of people have taken part in the celebrations every year across the world”, Sandhu said.

On hand at the Yoga Day event on the National Mall was special guest Dr. Sethuraman Panchanathan, the 15th director of the National Science Foundation (NSF), who commended Sandhu for his tireless service in promoting India-US ties.

“You have been a tremendous advocate, a great friend – a personal friend and a friend of the United States,” he told the ambassador. “You are promoting an invaluable partnership between the two nations. You are a tireless worker,” he said.

In his remarks to the gathering, Panchanathan spoke of the deep connection between yoga and science. “Yoga connotes unity, uniting in every form of every type, uniting the body, the mind and spirit so that we might have a healthy, happy and prosperous life. At the same time, yoga is also uniting the world, bringing people together” irrespective of geographical location or other divides, he said.

“Yoga is truly a uniting force, literally a force bringing people together all across the world”, he said, applauding the ancient practice as “a great gift by India to all of humanity.”

Both Panchanathan and Sandhu participated in performing the yog ‘asanas’ (postures) in the common yoga protocol, along with hundreds of attendees seated on mats which were spread out on the sprawling lawn of the Washington Monument.