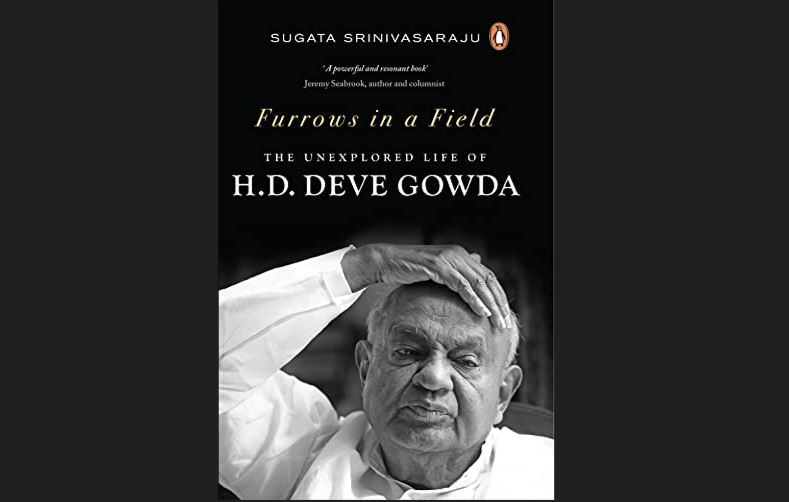 His prime ministerial tenure lasted for less than a year – from June 1, 1996 to April 21, 1997. But in a new political biography, Sugata Srinivasaraju, an award winning bilingual Indian writer, translator, and journalist, says Gowda was ‘underrated’.

Despite his underprivileged roots, there was no prime minister in the history of Indian prime ministers who was so democratically engaged, he says.

Gowda who was previously the 14th Chief Minister of Karnataka from 1994 to 1996 remains relevant in Indian politics even today over 25 years after stepping down, says Srinivasaraju.

Srinivasaraju started his career at Deccan Herald before moving on to Hindustan Times, and taking over as Editor (South) at Outlook magazine.

A member of the Editors Guild of India, he is the author of several books including ‘Keeping Faith with the Mother Tongue: The Anxieties of a Local Culture’ (2008), ‘Pickles from Home: The Worlds of Bilingual’ (2012) and ‘Kittale Nerale Perale: Avasarakke Etukida Maatu Baraha’ (2016), among others.

He has also received the Sahitya Akademi award twice for his translations.

In an interview with The American Bazaar in the San Francisco Bay Area during a recent visit, Srinivasaraju, discusses his most recent book, ‘Furrows in a Field: The Unexplored Life of H.D. Deve Gowda.

RM: Correct me if I’m mistaken, but ‘Furrows in a Field’ seems to be your first political biography. Why did you choose to write about Deve Gowda?

SS: Furrows in a Field is my first political biography – yes. But this was not my first book. I was trained in languages, cultures, and literatures, and I never studied journalism.

My first two books, in English, focused on language politics and the anxieties of local cultures. ‘Keeping Faith with the Mother Tongue’ was my first English publication, and the second was ‘Pickles from Home: The Worlds of a Bilingual.’

In these books, I was trying to explore different cultural identities, and what India has become, and how my local culture had changed, which is Kannada culture, and exploring the world views of local cultures.

‘Furrows in a Field’ is the first full-fledged political biography on the 11th prime minister, but I also see it as some kind of an extension of my two earlier books, because I was able to access primary material in Kannada, given that Deve Gowda is a Kannada person, and his archive consisted of primary material that I was able to understand, in addition to the English language material from his Prime Minister’s Office. This adds so much value to your writing when you are able to look at different sources.

RM: This then begs the question, what made you choose H.D. Deve Gowda as your primary source of interest for your first political biography?

SS: The answer is twofold: the first being the fact that he was prime minister of India. And prime ministers acquired a certain kind of aura and the new generation thinks that being a prime minister is a very big thing because (Prime Minister Narendra) Modi has made it look that way.

But, I realized that there was a second reason why I picked Deve Gowda. He was a prime minister that was underrated, and not widely discussed much at all.

There was no biography written in the past about Deve Gowda in English, and he was also the first Shudra prime minister, and belonged to the OBC category.

He was a farmer’s son, who had educated himself, first generation literate, had received an engineering education, and so was able to plan engineering projects, was a civil works contractor, and then made his way to politics.

Despite his underprivileged roots, there was no prime minister in the history of Indian prime ministers who was so democratically engaged.

I’ve spoken about this in a lot of interviews – the reason for me to, sort of, emphasize on that was because prime minister Manmohan Singh, who was prime minister for ten years, was not democratically engaged.

My hypothesis about Indian politics is that while Congress believed it was a master stroke to appoint Manmohan Singh as PM, he was a technocrat who did not lead democratically, which created a disengagement with ordinary people, which gave rise to a “strong leader.”

This has encouraged a kind of majoritarian politics in a very diverse country. In a country as diverse as India where every 20 kms, the spices change, the dialects change. Here was a man who came from a remote village in Hassan and went to Delhi to rule.

In the time of Modi, Deve Gowda is a symbol of federal politics because India is a union of states despite attempts to envision it as one India with the imposition of Hindi as a national language or Hindu. Constitutionally there is a loose sense of one India, but culturally it is a very diverse country.

The rhetoric of “one nation” ironically splinters it into division and disunity.  It was Deve Gowda, someone from the bottom of the social ladder, under-rated, someone the Anglophone and Hindi elite dismissed, this secular man, who was the first to visit Muslim camps and speak out against violence against Muslims in Godhra in 2002.

The only PM to have spent considerable time in the Northeast. He created a package of 6000 crores for the Northeast, he created a separate unit in the PMO for Northeast development.

Unlike Deve Gowda, a technocrat like Manmohan SIngh responded very differently by not even making a statement during NRC protests. He visited Kashmir four times in 11 months at the height of militancy when no PM had visited there for a decade, and he worked toward ensuring freedom of press and free elections.

He was determined to bring the Northeast, Kashmir, and other areas that are neglected to the mainstream. That is the resolve with which he goes out and frames policy.

He became a PM from the grassroots. He contested and won elections at the taluk board level and at the panchayat level. He never lost an election. If you circumvent the process of political engagement, then you will have authoritarian rule.

RM: It is quite clear that Deve Gowda has still remained relevant in Indian politics today. Why is this the case, even after over 25 years after stepping down?

SS: Although he was of a lower caste and did not belong in the Anglophone elite circles, he became PM without pelf, pedigree or patronage.

He is an organic secular person, which is to say that his secularism did not emerge from enlightenment ideas but from his own experience of working with Muslim farmhands, of a Muslim family that offers him a place to stay during his college days.

Being engaged in the political party itself tells you a lot. He has been a member of parliament, contesting elections, winning, losing, all of that has been happening. He lost Lok Sabha elections in 2019, but he won in Rajya Sabha.

And if you look at his record, I mean, he’ll put any young contestor to shame. He has spoken very, very eloquently, and even on the farm bills in September of 2021, the day he took oath, he warned Modi on what was going to happen in the future.

He is someone who has represented the ‘Real India’ and has continued to fight, and has continued to engage democratically. Engagement is what makes him relevant. But I also write critically about his political maneuvering and skullduggery, but survival is proof of who you are.

Read: Indra Nooyi: I focused on job at hand, over-prepared and over-delivered (November 25, 2021)

RM: What in your opinion were his key achievements in the top job?

SS: Some of his biggest achievements have been Kashmir, Northeast, Farakka Treaty, Bangladesh, as well as the Naga ceasefire. Years later in 2019, Nagas claimed that Deve Gowda was the only prime minister who saw their problem as a political problem and not a law and order problem. I have reproduced a good chunk of that event.

Punjab was a major achievement because of the ‘96 budget. His macroeconomic ideas were brilliant. He ensured this continuity of the liberalization in India between ‘91 and ‘95. He is the one who gives IT industry a tax holiday, he opens up the telecommunication sector, personal income tax levels are brought down, and all of this was attributed to (then finance minister P.) Chidambaram.

He closes the deal on the Delhi Metro, which was shelved in 1985. He brings it back. He writes a vision note as to what happens 25 years down the line if you don’t have a metro for Delhi and closes the financial deal with a loan from Japan.

He was responsible for the coffee revolution where he lifts the free sale quota and made it 100% free sale, which is the reason a Coffee Day could be born. He is the first to do a Voluntary Disclosure Scheme where black money is pooled together. He created a permanent fund called the Accelerated Irrigation Project Fund which helped complete irrigation projects in all these states. The Naga Peace Settlement. The way he brought back the democratic process in Kashmir.

RM: Can you tell us about how you were able to construct a political biography about Deve Gowda without any bias or unintentionally damaging Gowda’s reputation?

SS: Gowda’s reputation was not a concern for me. I wanted everybody to respect the integrity of the book. I was more worried about that. I’ve been a journalist and editor for 25 years, and so those conditions were very familiar to me. I wanted to make it a professional piece of work.

I developed respect for him as I dug into my research. There were so many positive political accomplishments, and the political elements like skulduggery, vindictiveness, and electoral backstabbing is common to all politics. I have seen several politicians, but Deve Gowda is one politician who always goes to a meeting with a big idea.

RM: What sort of work are you planning to do in the future?

SS: I have started working on my next book which I want to be done with very soon. It is going to be based in the US and I am trying to write about some activity that happened in the 70’s.

I am trying to write about the emergency and Indira Gandhi’s authoritarian rule, another prime minister in India. I have two more books planned that is taking me to French and British archives.

I don’t want to write boring books. I want it to be professionally done, and I want to tell stories that are written with reason and emotion and integrity.