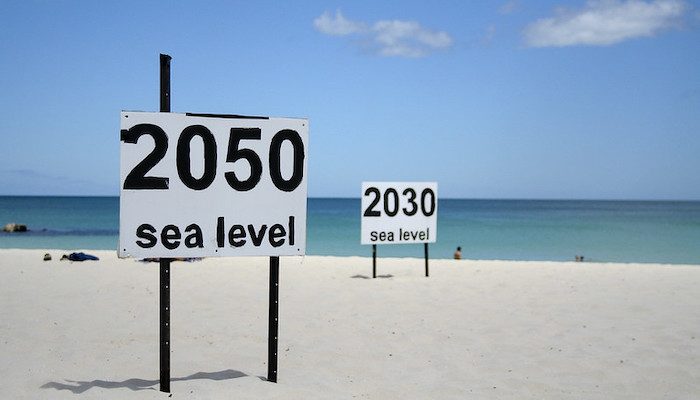 A decade ago, there were 15 low-lying islands in Louisiana but today, only about six islands are there and the rest have disappeared under water. Scientists estimate Louisiana loses one football field worth of ground every 60 to 90 minutes.

Most barrier islands tend to rise and fall over the centuries, a natural phenomenon known as vanishing islands. But rising seas and increased frequency of storms and climate change often accelerate the pace.

“Louisiana is rapidly losing land,” said Bonnie Slaton, a researcher at the University of Louisiana at Lafayette. “Subsidence and sea level rise are a double whammy.”

Similarly, five of the Solomon Islands recently submerged by rising sea levels, which are rising at seven millimeters per year over the last two decades, due to both global warming and stronger trade winds.

When Simon Albert of the University of Queensland and his team analyzed aerial and satellite images from 1947 to 2014 of 33 reef islands in the Solomons, they found five islands had disappeared and another six had shrunk by 20 to 62 percent, which was confirmed with anecdotal reports of local people.

“All the projections show that in the second half of the century, the rest of the globe will reach the rate of sea level rise that the Solomon Islands is currently experiencing,” he warns.

Estimates show that the Pacific Island, Kiribati, which has 21 islands, is going to be the first nation to submerge under rising sea waters because of climate change.

The threats the Pacific islands face are numerous – from sea level rise that is reshaping and flooding low-lying places like the Marshall Islands and Tuvalu, to increasingly severe storms that have ravaged Fiji and Vanuatu in the Pacific, São Tomé and Príncipe in the equatorial Atlantic, and Dominica in the Caribbean.

On July 15, the Pacific Islands Forum (PIF) launched its 2050 strategy to protect island countries, especially, the Caribbean, Pacific Islands and Maldives in the forefront facing fast erosion of their islands. But the task ahead is not easy as sea level rise remains imminent.

Imminent sea level rise
NOAA estimates that “since 1992, new methods of satellite altimetry (the measurement of elevation or altitude) indicate a rate of rise of 0.12 inches per year.”

Even NASA calculations show that the average sea level rise is 0.13 inches per year and that sea-level rise is directly caused by the expansion of water as it warms and aided by the melting of polar ice caps.

In the long term, sea level rise is projected to be 31 to 61 inches by 2100. And, the catastrophe projected is equally immense. Several coastal cities will disappear by 2100 or shrink considerably.

According to the recent World Economic Forum, Dhaka in Bangladesh, Lagos in Nigeria and Bangkok in Thailand could be entirely drowned by 2100, affecting about 250 million people, according to a 2019 study.

Read: Three islands disappeared in the past year. Is climate change to blame? (June 9, 2019)

Matt King of the University of Tasmania echoes similar views. “Glaciers are already out of balance with their surroundings and will continue to melt. We’re locked into a sea level rise that, under the best case scenario, will eventually reach several tens of centimeters.”

“The situation in the Solomon Islands is a window into what may happen – entire nations could be facing extinction,” insists King.