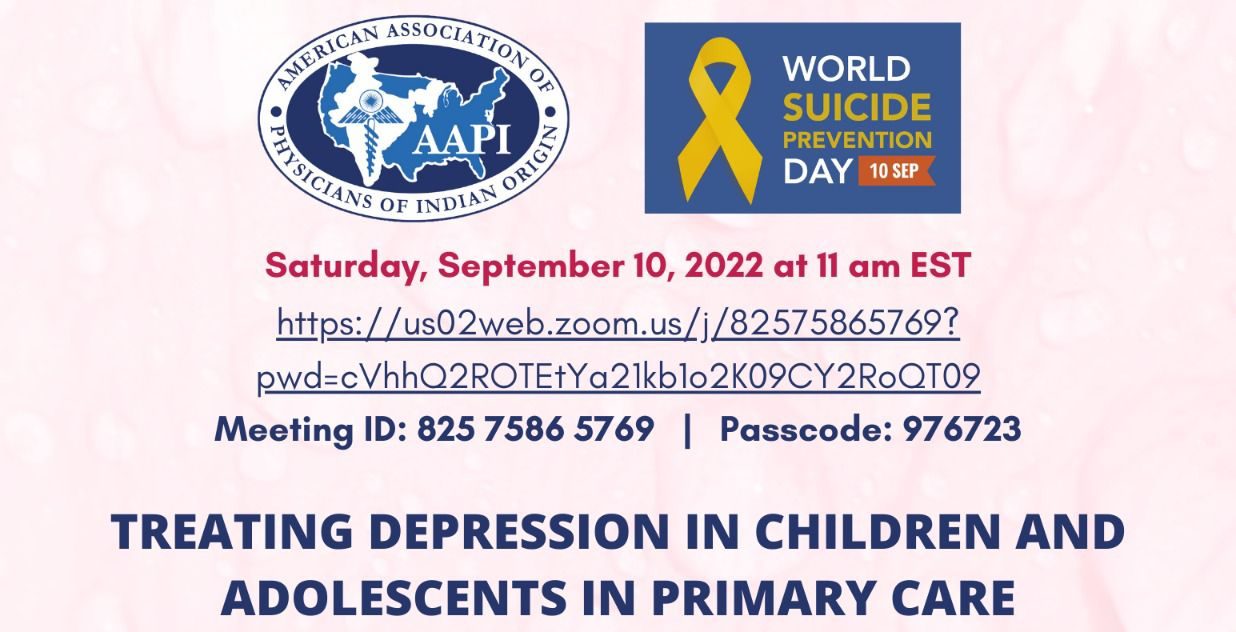 Every 40 seconds someone takes their own life somewhere in the world, while there is one death by suicide every 11 minutes in America with a mind blowing 1.3 million people attempting suicide each year.

So why do people kill themselves, who are the most vulnerable and what can be done to prevent this tragic loss of life?

American Association of Physicians of Indian Origin (AAPI), the largest ethnic organization in the United States, marked World Suicide Prevention Day on Sep 10 with a live online seminar to bring awareness on this critical issue.

With suicide, especially among children and adolescents becoming a growing phenomenon of concern, the webinar led by AAPI President Dr. Ravi Kolli, focused on “Treating Depression in Children and Adolescents in Primary Care,” according to a media release.

Mental health issues like depression are known to be the leading cause for attempting suicide, according to Dr Kolli, a Board-certified psychiatrist from Pennsylvania. Suicide often occurs in a moment of unbearable pain or deep despair.

Millions of Americans consider suicide, make a suicide plan, or attempt suicide every year – especially young Americans for whom suicide is the second leading cause of death, he said.

“Nationally in 2020, there was approximately one death by suicide every 11 minutes. In the same year, for people aged 10–14 and 25–34 years, suicide was the second leading cause of death,” Dr. Kolli said citing World Health Organization (WHO) statistics.

“By drawing attention to the problem of suicide in the United States, the suicide prevention campaign also strives to reduce the stigma surrounding the topic, as well as encourage the pursuit of mental health assistance and support people who have attempted suicide,” Dr. Kolli said.

With the objective of strengthening and expanding the Lifeline infrastructure to respond to crisis calls, texts, and chats anytime and establishing a system that provides more opportunities for crisis service, the US government has initiated the soft launch of Emergency Suicide Prevention Number, 988, transitioning from 1-800-273-TALK to 988, he noted.

Dr. Malti Mehta, a member of AAPI Board and a moderator of the session, stressed the importance of understanding how from inception onwards, the family dynamics contributes to depression and suicidality among children, especially among children of Indian heritage.

“Let us work together with our family, friends, healthcare workers, religious and political leaders to prevent suicide through active counseling and support,” she said. “It is time we empowered others to be in charge of their lives and value the one life they have.”

“Childhood emotional instability is a challenge to understand and treat,” she said suggesting that parents talk directly and matter-of-factly about suicide with children.

“Do not underestimate the threat of suicide or invalidate feelings. Do not be judgmental. Do not argue or debate if suicide is right or wrong. Do not say that their pain/stressor is not a serious enough reason. Do not lecture on the value of life. DO NOT be sworn to secrecy.”

Among other things, Dr. Vuppala stressed the need for a minimum of 8.5 hours of sleep at night and limiting screen time with less than two hours per day of recreational screen time for school-age children, and less than one hour per day for 2-5 yrs. old children.

During the interactive session, Dr. Kolli and Dr. Vuppala shared their insights on how “mindfulness and meditation” have contributed to stress reduction and prevent suicidality.

Research on meditation and mindfulness has been shown to improve holistic person. Spirituality is found to be a valuable resource in combating loneliness and depression, Dr. Vuppala said.