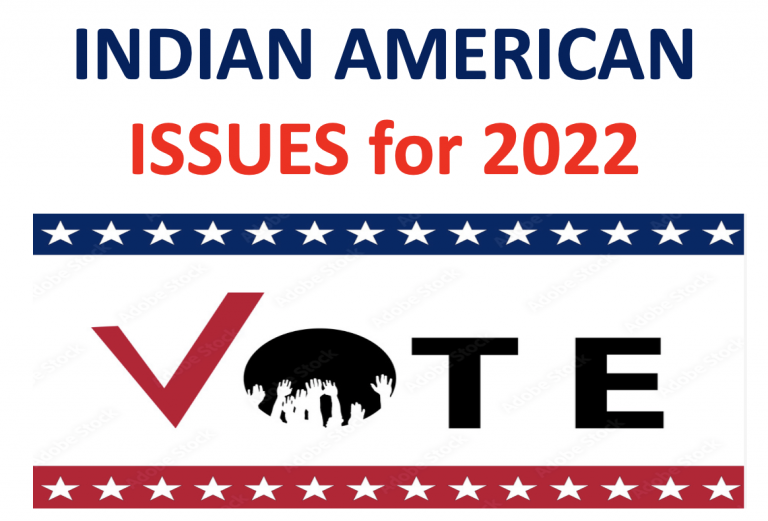 As America heads for crucial Nov 8 mid-term Congressional elections, an Indian American think tank has published what it calls important asks on their issues and policy matters.

Among the issues flagged by the Foundation for India and Indian Diaspora Studies (FIIDS) are stopping injustice to high tech immigrants, eliminating visa appointment delays, ending campaign of misinformation and hate and cultural recognition.

Also listed are support for US-India strategic partnership and concern over terror funding/military aid to Pakistan and inflation and recession.

“As Indian Americans are almost ~4.5million in population with a high concentration in critical competitions and swing states, they want their voice be heard on important issues and policy matters,” said FIIDS director Khanderao Kand.

As a part of a four-weeks long #IndoAmericanVotesMatter campaign, FIIDS had earlier launched, voting registration, candidate analysis, survey of Indian Americans and a campaign for voting.

FIIDS said its list of issues was based on past surveys, discussions with community leaders, analysts, and own research and analysis.

As mail-in voting has begun and will continue for the two weeks, this list will be useful for Indian American voters to reflect on and to discuss issues of their importance with candidates and within the community, it said.

Stop injustice to high tech immigrants: Though Indian immigrants are a ~30% workforce building most advancements in the tech industry that provides an international edge to the USA, the Indian tech professionals, are stagnant like bonded laborers for more than ~50-60 years due to country-wise green card limit of 5000 GC per year for processing hundreds of thousands of backlog, FIIDS said.

It urged elected officials and executives to one time clear all the backlog and pass HR 3648 Eagle Act 2022 to prohibit this backup in the future.

Eliminating visa appointment delays: After the painfully long covid period ended and travel restrictions were lifted, relatives want to visit US to meet family, attend events and heal together from the losses they endured, FIIDS said.

However, visa appointments in the US consulates in India have almost ~900 days long wait, making everyone suffer. FIIDS requested help in pursuing the department of state to add staff to eliminate the wait period.

Campaign of misinformation and hate: FIIDS said it “sadly observes that in this land of liberty and freedom, there is a vicious campaign of negative propaganda against India and the Indian diaspora, resulting not only in friction in otherwise smooth US-India relations but also increased incidents of ethnic and religious hate crimes against IndoAmericans in general and Hindu-Sikh communities in specific.”

FIIDS requested investigative agencies’ help as well as legislative help in stopping hateful misinformation campaigns and the entities behind the campaigns.

Inflation and recession: FIIDS said Indian Americans are concerned about both inflation and recession. As the sudden and high increases in interest rates so far didn’t reduce inflation but pushed the country in a recession, FIIDS suggested that “the focus should be to address root causes like increasing gas supply to reduce high gas price and pressure on production and the supply chain from China.”

It requested continuing support for any initiatives related to the same as well as strengthening joint ventures with India in various areas like energy, startups, military manufacturing, nuclear.

FIIDS also requested lawmakers help to permanently remove India from CAATSA sanctions. To strengthen the partnership further, it requested to expedite the appointment of an ambassador to India.

Terror funding / military aid to Pakistan: FIIDS said it was aware that despite India being a global strategic partner, the Biden administration approved $450 million military F-16 upgrade, which will most likely be used against India.

Indian Americans, it said “are also more concerned that despite ongoing acts of Pak-sponsored terrorism against India, Pakistan has been removed from the watch list of the Financial Action Task Force (FATF), the watchdog of terrorist funding.”