Starting with Har Gobind Khorana in 1968, five Indian Americans have received the Nobel Prize, considered the world’s most distinguished honor for intellectual achievement.

Instituted by Swedish Chemist Alfred Nobel, Nobel Prizes are awarded in the fields of Physics, Chemistry, Physiology or Medicine, Literature, and Peace to “those who, during the preceding year, have conferred the greatest benefit to humankind.”

Har Gobind Khorana:  Indian American biochemist, Khorana shared the 1968 Nobel Prize for Physiology or Medicine with Marshall W. Nirenberg and Robert W. Holley for research that showed the order of nucleotides in nucleic acids, which carry the genetic code of the cell and control the cell’s synthesis of proteins.

Born in Raipur, a village in Multan, in present day Pakistan in 1922, in a Punjabi Hindu family, Khorana studied at the Punjab University in Lahore before moving to England in 1945.  He studied organic chemistry at the University of Liverpool and received his PhD in 1948.

In 1960 Khorana accepted a position as co-director of the University of Wisconsin–Madison’s Institute for Enzyme Research.

He became a US citizen in 1966. Beginning in 1970, Khorana was the Alfred P Sloan Professor of Biology and Chemistry at the Massachusetts Institute of Technology and later, a member of the Board of Scientific Governors at The Scripps Research Institute. He retired from MIT in 2007. 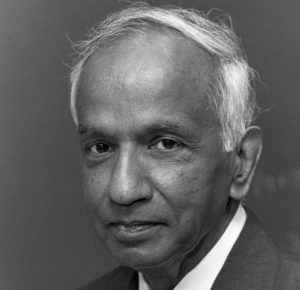 Subrahmanyan Chandrasekhar: Indian American theoretical physicist, Chandrasekhar shared the 1983 Nobel Prize for Physics with William A. Fowler for “…theoretical studies of the physical processes of importance to the structure and evolution of the stars.”

His mathematical treatment of stellar evolution yielded many of the current theoretical models of the later evolutionary stages of massive stars and black holes. Many concepts, institutions, and inventions, including the Chandrasekhar limit and the Chandra X-Ray Observatory, are named after him.

Born in 1910 in Lahore, in present day Pakistan, Chandrasekhar studied at Presidency College, Madras (now Chennai) and the University of Cambridge.

A long-time professor at the University of Chicago, he did some of his studies at the Yerkes Observatory, Chandrasekhar became a US citizen in 1953. 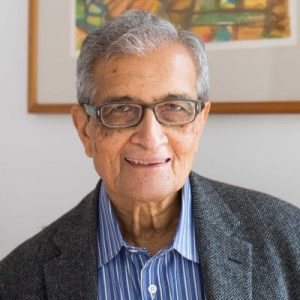 Amartya Sen: Indian economist and philosopher, Amartya Sen was awarded the Nobel Memorial Prize in Economic Sciences in 1998 for his work in welfare economics. He received India’s highest civilian honor Bharat Ratna in 1999.

Sen, who has since 1972 taught and worked in the United Kingdom and the United States. has made contributions to welfare economics, social choice theory, economic and social justice, economic theories of famines, decision theory, development economics, public health, and measures of well-being of countries.

Born in 1933 in Shantiniketan, India, Sen initially studied in Presidency College, Calcutta and then at Trinity College, Cambridge where he received his bachelors, masters and PhD degrees.

After teaching in a number of universities in India and England, Sen joined Harvard University in 1987. In 1998 he was appointed as Master of Trinity College, Cambridge, becoming the first Asian head of an Oxbridge college.

In 2004. Sen returned to Harvard where he currently serves as the Thomas W. Lamont University Professor of Economics. 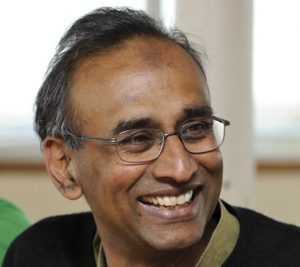 Venkatraman Ramakrishnan: Indian-born British and American structural biologist Ramakrishnan shared the 2009 Nobel Prize in Chemistry with Thomas A. Steitz and Ada Yonath, “for studies of the structure and function of the ribosome.”

Born in 1952 in Tamil Nadu, India. He got his bachelor’s degree in physics from Baroda University in Gujarat, India in 1971. He then moved to the US and received a PhD from Ohio University. From 1978 to 1982, he carried out postdoctoral studies at Yale University.

Since 1999, he has worked as a group leader at the Medical Research Council (MRC) Laboratory of Molecular Biology (LMB) on the Cambridge Biomedical Campus, UK and is a Fellow of Trinity College, Cambridge. He served as President of the Royal Society from 2015 to 2020.

He received India’s second highest civilian honor, the Padma Vibhushan, in 2010. Ramakrishnan was knighted in the 2012 New Year Honours for services to Molecular Biology.

In 2017, Ramakrishnan received the Golden Plate Award of the American Academy of Achievement. 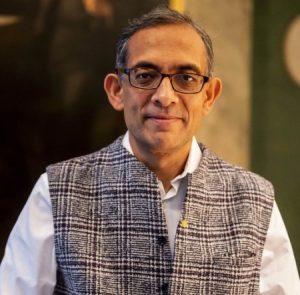 Currently the Ford Foundation International Professor of Economics at Massachusetts Institute of Technology, Banerjee and Esther Duflo, who are married, are the sixth married couple to jointly win a Nobel Prize.

Born in Mumbai, India in 1961, Banerjee earned his bachelor’s degree in Economics from University of Calcutta and his Masters at Jawaharlal Nehru University in Delhi. In 1998, he earned a doctorate from Harvard University.

He has taught at Harvard and Princeton University. He has also been a Guggenheim Fellow and an Alfred P. Sloan Fellow.

In 2013, Banerjee was named by the United Nations Secretary General Ban Ki-Moon to a panel of experts tasked with updating the Millennium Development Goals after 2015 (their expiration date).

In 2014, he received the Bernhard-Harms-Prize from the Kiel Institute for the World Economy.