When citizens work toward moving up on the ladder of prosperity, development goals are automatically met, Ajay Pandey, the CEO of the SM Sehgal Foundation, told the United Nations’ 56th Session of the Commission for Social Development in New York on February 5.

Making a presentation on the foundation’s work with communities on rural development, he said engaging all groups segregated by varied factors is imperative to achieve impact.

The 10-day 56th Session of the Commission for Social Development, which began on January 29, concludes on February 7. It is primarily discussing “strategies for eradicating poverty to achieve sustainable development for all.” 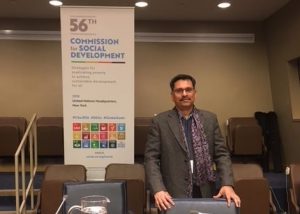 Founded by the Indian American philanthropist, crop scientist and entrepreneur Suri Sehgal, the Gurugram, India, -based SM Sehgal Foundation is present in some 700 Indian villages, impacting more than 230,000 villagers in five states. More than 50 percent of the people the foundation is working with are women.

Pandey named women, the elderly, the youth and the infirm as vulnerable groups, and said it is important to recognize the role of local government institutions and engagement of citizenry in initiating and affecting any development initiative.

“A prudent policy mix is therefore required that would strive for inclusive growth,” he said in the written statement submitted before the Commission for Social Development. “One that could provide the opportunities and improve capabilities of ‘the farthest behind’ so as to enable them to participate in a sustainable growth process,” he added.

Speaking from his experience in India and South Asia, Pandey said “investment in social capital can thrust sustainable social development.”

The work of the SM Sehgal Foundation among the rural poor shows that “an effective amalgamation of empowered citizenry and accountable institutions of governance can create inclusive spaces for equitable development, he said.

“Bringing in innovations in water security, food security and social justice, we have developed technologies and models such as the high pressure recharge well, bio sand filters and salt resilient crop varieties, some of which have been recognized by the United Nations as adaptable and scalable solutions,” he said. “These models are now being adapted in several continents across the globe to create better future for all. Success of these models is however reliant on the foundational aspects of program designing which works on the principle of creating constructive democratic spaces for all. It is the good rural governance initiative of the foundation that forms the basis of every innovation or intervention, thus planned.”

Pandey said the foundation, through its 15,000 trained volunteers, who work as effective citizen participants in addressing the disconnect between promises of law and their grassroots reality, is helping bridge the ever widening gap between policy and people. “The foundation is working tirelessly to develop this initiative nationally and globally such that law and policies become people-centric in every sense — their formulations, implementation, correction should all be inclusive of masses,” he said. “Through this initiative, communities work to secure good governance as they participate to strengthen democracy, rule of law, and justice. All this to break the difficulties that law, its language, its structures and their language together weave against the common people.”