At least 19 Indian Americans — including four incumbents — are running for the US House of Representatives this year.

Five Indian Americans are serving in the 115th Congress, a record for the community, which had until November 2016 produced only three members of Congress: Dalip Singh Saundh, Bobby Jindal and Ami Bera. In addition to Californian Bera, three other Democrats — Raja Krishnamoorthi of Illinois, Pramila Jayapal of Washington, and Ro Khanna of California — are currently in the US House of Representatives. (California’s junior Senator Kamala Harris, whose mother is of Indian origin, was also elected in November 2016.) All four representatives are seeking reelection this year.

Besides the four incumbents, at least 15 more Indian Americans are running for the US Congress this year. Here is a list of Indian Americans who have announced their candidacy from various congressional districts across the country:

In May 2017, Maryland State Delegate Aruna Miller became one of the first Indian Americans to jump into fray when she filed a “Statement of Candidacy” form with the Federal Election Commission to run for Congress from Maryland’s 6th congressional district. The incumbent John Delaney has announced that he’s not seeking reelection.

Miller, who is a civil engineer by profession, came to the United States at age 7. She first got elected to the Maryland House of Delegates in November 2010. She is a member of the Ways & Means Committee and its subcommittees on revenue, transportation, and education. She is the second Indian American delegate from Maryland to run for Congress in two years. Fellow Democrat Kumar Barve ran unsuccessfully from the neighboring 8th district in 2016.  Miller and her husband, David Miller, live in Darnestown, MD, just outside of Washington, DC.

Miller has said her focus areas will be jobs, economy, and infrastructure.

Dr. Tipirneni, an emergency room physician, first announced her candidacy from Arizona’s 8th district on July 19, 2017. A special election was announced for the seat after the incumbent Rep. Trent Franks resigned on December 8, following a House ethics panel decision to investigate him over sexual harassment charges.

The primary is scheduled for February 27 and the general election for April 24.

Tipirneni’s family immigrated from India when she was three. She grew up in suburban Cleveland and obtained a medical degree from Northeast Ohio Medical University.  After serving as Chief Resident of the University of Michigan’s Emergency Medicine program, she and husband, Kishore, whom she met at the medical school, moved to the Phoenix, AZ, area. The couple has three children.

Malik believes in fair tax reform that benefits both individuals and small businesses. She is assuring quality, low-cost health coverage for everyone and support to immigrants by policies that unite families and bring diverse talent. Born in Kansas City, Missouri, Malik was 7 when her family moved to Arizona where her father worked as a mechanical and computer engineer.

Diganvkar is campaigning on the issues of security, affordability, fairness, and entrepreneurship.

Born in India, Diganvker’s father was a government officer and his mother a teacher. According to his website, he graduated from Shah N. H. Commerce College, in Valsad, Gujarat, with a degree in Business Management and Advanced Accounting.

In 1995, Diganvker immigrated to the United States to pursue his American dream. He got a job working at a small retail store in Chicago, then worked as a ticket auditor for United Airlines. He became an American citizen on February 4, 2003, and after years of hard work and saving money he launched his first business, of renting cars, which he ran for years.

After closing down his car rental business, Diganvker launched his credit card processing firm based in Schaumburg.

Another Indian American running for the Republican Party nomination from Illinois’ 8th district is Vandana Jhingan, a journalist by profession. She is backed by the Republican Hindu Coalition.

Jhingan, a Chicago-based journalist, is the Midwest Bureau Chief of the Indian American cable network TV Asia. Like Krishnamoorthi, she also lives in Schaumburg, Illinois.

Jhingan, who is from New Delhi, came to the United States after graduating in Business Administration from the Faculty of Management Studies in Delhi. She also studied philosophy at University of Delhi.

A physician by profession, Shah is running from Illinois’ 10th congressional district seat as a Republican.

The 37-year-old candidate from Libertyville mainly plans to focus on the areas including healthcare crisis, taxes and spending; and championing the role of citizen legislators as intended by the nation’s founders.

The seat is currently held by the three-term incumbent Democrat Brad Schneider.

The Republican primary is scheduled for March 20. Shah is competing against two other Republicans, Jeremy Wynes and Doug Bennett, who have already announced their candidacy earlier.

Shah is the founder of Flagship Healthcare, a Chicago firm that supports some 800 physicians and several hospitals across the country.

Arora, who is seeking the Republican nomination, filed his paperwork with the state to register as a candidate in December. His focus would be on reviving the economy of Connecticut, lowering the cost of healthcare and improving government.

Born in India, Arora came to the United States as a graduate student. After his graduation, he worked for large corporations for a decade.

After working with Amaranth Advisors, LLC, a Greenwich-based hedge fund that collapsed in 2006, Arora started his own investment management firm, ARCIM Advisors, LLC. In 2012, he co-founded Northlander Advisors, an investment firm with a focus on European energy.

Abhijit Das, “a constitutional lawyer by training, but an entrepreneur at heart,” as he calls himself, is the first Indian American congressional candidate to run from Massachusetts. He is one of the 13 candidates who have so far entered the race to succeed the retiring Democrat Niki Tsongas, the wife of former presidential candidate and Massachusetts Sen. Paul Tsongas.

Son of immigrants from India, Das — popularly known as “Beej” — grew up in Lowell, MA. After earning his bachelor’s in political science from Middlebury College in Vermont and a JD from the University of Michigan Law School, he worked as a lawyer for a few years. He went on to work for Hilton Worldwide, where he was responsible for the development of its brands on the Indian subcontinent. Das left Hilton to launch his own hospitality business, Troca Hotels & Yachts.

Das says he is running for congress because politicians in “Washington have become overgrown unruly children who can neither get along nor get out of each other’s way.” He says on his website, “We all want an American government as worthy as its people. ”

The primary in the state is on September 4.

Sri Preston Kulkarni, who worked as aide to Senator Kirsten Gillibrand on the Senate Armed Services Committee, is running from Texas’ 22nd congressional district, which has the largest Indian American population in the state.

The former Foreign Service Officer has spent time in Iraq, Israel, Russia, Taiwan and Jamaica during his 14-year career with the Department of State.

The Democrat says he is running because “hostility and conflict are being inflamed in our own country, through the politics of anger and demagoguery, demonization of specific ethnic and religious groups, threats to rule of law, degradation of women, and an undermining of democratic institutions like a free press.”

The Texas 22nd district, which is in the Greater Houston area, is currently represented by Republican Pete Olson. It has a highly diverse population with 25 percent Hispanics and 18 percent Asians. Having served the country as diplomat, he says he knows how to “push back the tide of fear” and offer “a positive vision for the future that all groups can believe in.”

Chintan Desai moved to Helena, Arkansas, from California in 2010 to teach fifth graders as part of Teach for America. Seven years later, he’s preparing to take on the three-term incumbent Republican Rick Crawford.

Desai grew up in San Luis Obispo, California, and earned his undergrad degree in political science from the University of California, Davis. “My unlikely story began when my parents moved to this country with little money and even fewer friends,” he says on website. “They lived the American Dream working hard every waking moment to provide their only child a bright future. I had opportunities beyond my wildest dreams — going to college to earn a degree and launching a career in education.”

Once a Democratic stronghold, the district is reliably Republican now.

The heavily Democratic district, one of the richest in the country, covers parts of Harlem and western Queens. Maloney, who has been a member of Congress since 1993, has a second challenger in the June 26th primary.

Patel, who has a law degree from NYU, is also an alumnus of the Stanford University and UK’s Cambridge University. He is the president of the Sun Group of Companies, a real estate development and investment firm specializing in the hospitality industry.

Patel worked for the Obama campaigns in 2008 and 2013, and also served in the 2013 inauguration committee.

Sran, a lawyer by training who holds a PhD in education, is the founder of the Loudoun School for the Gifted. Public education and small business are among the main issues he is campaigning on.

“As a small business owner, I would improve conditions for those who start and grow businesses that create economic opportunities in my district,” he says on his campaign website. “As the child of immigrants, I would push back against intolerance and hatred.”

“If voters elected representatives based on their CVs, Mr Sran would cakewalk into Congress,” the Economist wrote about him. 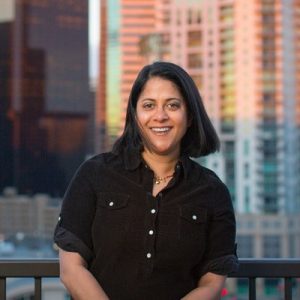 A strong advocate of the rights of colored people, she is the co-founder of In This Together Media, which campaigns for more brown, black, LGBTQI, poor, and disabled voices in kids’ media.

Daughter of immigrant Indian parents, Rao stands for the protection of immigrant families, universal healthcare, affordable housing, and environmental protection among many other issues.

A graduate of the University of Virginia and New York University School of Law, she worked as a law clerk for the United States courts of Appeals for the Third Circuit in Philadelphia and practiced law at Cleary Gottlieb Steen & Hamilton in New York City. Rao also worked as a television news producer in Washington, D.C., and Miami.

Omar Vaid, son of immigrant parents from Gujarat, is a strong advocate of immigrant rights. It is the only New York City congressional district currently represented a Republican. The incumbent is Dan Donovan, who won a special election in 2015.

Vaid, who grew up in Illinois and Florida, earned his bachelor’s degree in Business Management. He moved to New York in 2006 to launch a career in the movie industry.  In 2009 he joined the International Alliance of Theatrical Stage Employees, Local 52. He works on both props and set decoration for New York productions, including the TV shows “Luke Cage” and “The Get Down.”

Radhakrishna Mohan is the second Indian American running from New York’s 11th district. An information technology specialist by profession, he has been working for the state of New York for the last 28 years. He currently serves as an executive board member and chair of workers’ compensation statewide committee and a member of Statewide IT Committee.

Mohan, who came to the United States in 1989, holds a master’s degree in economics and a degree in mathematics and statistics and an associate degree in computer science.

“I want to play an active role in making my community, state and country a safer, better place to raise my children, run my business, render service to the community and forge a future filled with unlimited promise and realized potential,” he says on his website.