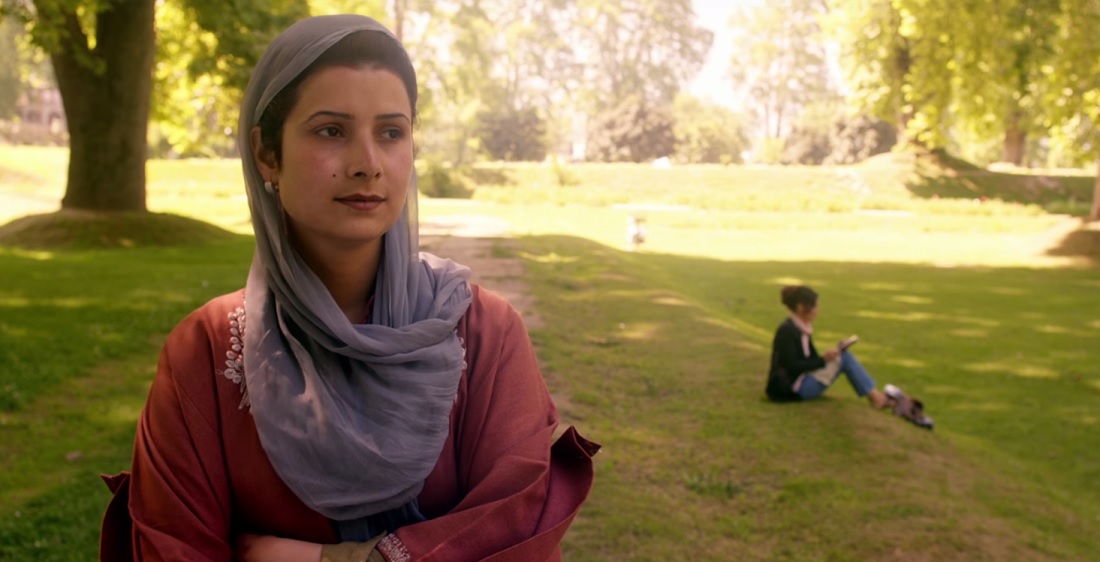 Review: The Danish Renzu-directed movie Half Widow is about coming to terms with life.

In early September, I had the great opportunity to attend the DC South Asian Film Festival (DCSAFF) 2018. As everyone knows, the festival showcases films from all over the world that either take place in South Asia, star South Asian talent or are directed by South Asian filmmakers. One of the films I got to see was Half Widow, which will be having another screening for DC audiences by DCSAFF on November 3rd at 1 pm at the Johns Hopkins University Gilchrist Auditorium (at 9601 Medical Center Drive in Rockville, MD). I thought it would be a good opportunity for me to share my views on this film.

Half Widow tells the tale of a young Kashmiri woman, Neela (Neelofar Hamid), who gets married to Khalid (Mir Sarwar). Living with them is Neela’s doting young brother Zakir (Shahnawaz Bhat). Amidst the strife and tensions in Kashmir, Neela’s husband is taken away and thus begins a wife’s journey to find her husband. Will Neela find Khalid? Is Khalid still alive? Will this terrible occurrence tear apart the remaining family Neela has? To find out, one must watch Half Widow.

For some context, the title is not only the name of the movie, but is broadly referred to women in Kashmir whose husbands disappear or face similar circumstances to what Neela faces in the film. Therefore, the entire foundation of the movie is based on horrifying occurrences that take place regularly in areas of conflict in Kashmir.

In terms of performances, each and every actor has performed their roles brilliantly. Neelofar Hamid is incredible as Neela. Her emotional journey from being a young, innocent woman to one who supposedly loses everything is depicted flawlessly. She acts very naturally and when viewing her performance, it almost seems as if you are watching through a window in a regular Kashmiri household. The sequence where she breaks down with Zakir or when Khalid is taken away are superbly performed by her. Mir Sarwar is also quite good in his short but pivotal role as Khalid, while Shahnawaz Bhat is amazing as Zakir. His character too goes through a journey, from being a clingy, youthful younger brother to a responsible man of the house, the talented Bhat pulls off the nuances of the role with panache.

The cinematography is beautiful in the film, depicting both the natural beauty and the domesticated life aspects of Kashmir. The script by Danish Renzu and Gaya Bhola, and dialogues by Sunayna Kachroo, are phenomenal and poetic. Of course, Urdu is the language spoken in the film and its richness adds to the overall flavor and authenticity in the film.

I wanted to talk a little more about the script and themes of the film. Although the basic gist of the story (husband getting taken away, wife trying to find him etc). has been done in different ways and settings with more mainstream Hindi movies as well, it is the overall message of Half Widow which makes it truly a must watch. Whereas conventional Bollywood films have lots of violence, overblown acting and too often convenient and idealistic resolutions to the conflicts in the movies, Half Widow takes a very believable and natural approach in its conclusion (which I will not reveal). This is a film not necessarily about a “wife’s dramatic search for her husband”. This is a film about moving on, about coming to terms with life, living with the beauty within. Not everything in life can reach a happy ending, but that is not grounds to stop living. Life offers ways to keep the beauty of things that are lost, alive within the soul. The quicker this realization happens, the better one can deal with loss. This wonderful message was my takeaway from the film, and to me, represents the reality of life which most movies do not depict.

If there is one specific criticism I have, it is that the film’s editing could have been crisper. Sometimes the film drags more than it should, and I think some sequences could have been cut to reach the ultimate point of the movie quicker. In a film that has a heavy theme, it is crucial to edit it in a way where the message gets registered but doesn’t prolong it too much. Half Widow tends to elongate the journey to the destination.

All in all, I will give it 4.5/5. It’s a very touching and superbly acted film that should not be missed. DC area folks, please do go see it on Nov 3rd. I will note that the film was also an official selection at the Seattle International Film Festival, so is making splashes all around! Do see it!