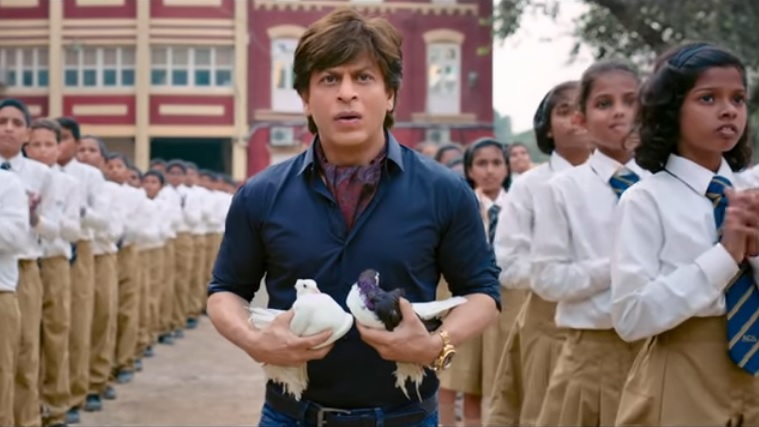 Shahrukh Khan, Mr. Rai, you can do better than this.

Everyone knows that Shahrukh Khan is my most favorite actor. He has been my biggest inspiration, and whom I look up to as a beacon of hard work, success and ambition. A man who came to a seedy world with nothing and ended up being its “King”. With countless movies like DDLJ, K3G, Kuch Kuch Hota Hai, Dil To Pagal Hai, Darr etc. to his credit, undoubtedly, this man is a legend.

Unfortunately, the last few years have been rough for the Baadshah of Bollywood. Since Chennai Express, SRK has not seen his movies do as epic business as is expected from a man of his stature. Whether it was Happy New Year, Dilwale, Fan, Raees, or Jab Harry Met Sejal, the King has put me and audiences down. However, when I heard of this film, Zero, I felt in my heart of hearts that this would be the movie to bring SRK back to glory for several reasons. First, it was to be directed by Aanand L. Rai, whose Tanu Weds Manu series is simply phenomenal. Second, alongside SRK, the movie would star the multi-talented Anushka Sharma and the beautiful Katrina Kaif, two of the biggest female actors today. Third, the concept that had been revealed about the movie, pertaining to the love story of a spunky dwarf, sounded novel and interesting. Special effects would definitely be something that would be to watch for, but also the challenge of a superstar playing a “hatke” kind of role was intriguing. Looking at how excited the director and cast was in relation to this film, I prayed and I prayed that this film would not disappoint.

Zero is the story of a 38 year old dwarf, Bauaa Singh (SRK), who lives with his parents in Meerut and spends his days with his best friend (Mohammad Zeeshan Ayyub) prancing around his “mohallah”. He is infatuated with superstar actress Babita Kumari (Katrina Kaif), and fantasizes about romancing her. Responding to a Shaadi.com ad for a woman named Aafia (Anushka Sharma), who has cerebral palsy, Bauaa and Aafia develop a romantic relationship. However, circumstances crop up which separate Bauaa and Aafia. Will they reunite? Will Bauaa mature and mend his ways? Will he meet Babita Kumar and will she return his affection? To find out what happens, watch Zero.

Now to the acting, I will say that after a long time, I saw SRK enjoying himself. He has actually put in a good performance as Bauaa, but it is not something that will be remembered by the ages as much as he had hoped. It is basically one of his regular, energetic characters just in a different form. He still, however, does have the ability to make you sympathize with him when something goes wrong. For this point, just look at his facial expressions in the scene when he reunites with Anushka after the gap in their relationship. Only SRK can pull off such hurt and surprise with flawlessness.

Anushka Sharma, who is normally an incredible actress, is a caricature this time. Her attempt to play a person with cerebral palsy does not come off well, and seems like someone trying hard to get the nuances right. I do feel she was sincere in her effort, but it does not translate sadly.

Katrina Kaif is amazing as Babita. I think this was the role she was waiting for to prove that she can act naturally. There is no overacting, it is completely on pitch. She has done a fabulous job! Unfortunately, the character does not have a big role in the film, and as a result, all of her efforts will go to waste during award season.

Other pillars of the film are the supporting actors – Tigmanshu Dhulia, Mohd. Zeeshan Ayyub, Sheeba Chadda and Brijendra Kala. They all perform excellently and, with the exception of Zeeshan, are severely underutilized in the movie, which is a travesty. These characters never develop beyond being “functional” supporting players, which wastes their acting talent. More should have been done here by the writer.

The music by Ajay-Atul is quite good. Mera Naamtu is an amazingly beautiful song, and is shot well. Issaqbaazi, featuring SRK and Salman together on screen, is a fun watch. Other songs are situational and are fine for what they are supposed to function as.

The special effects are about 90 percent good. Some minor glitches here and there, but overall it is fine in this department.

Now, let me get into my thoughts about this movie in detail. And this portion of my review will be a reflection of the flaws of the editing, scripting and direction of the movie.

While watching interviews and reading articles of the cast and director, everyone talked about how the movie is about individuals being incomplete and how they are searching to be whole. I think that this is a brilliant concept…except this movie did not execute this properly at all. The whole movie is about Bauaa and, what I would call, his selfishness. This is a dwarf character with attitude for sure, but is not someone that you feel for or identify with at all because he is completely selfish. As a result, you think of him negatively and although you are supposed to root for him, ultimately you want him to receive comeuppance for what he does to certain characters. This was one failure by director Aanand L. Rai and writer Himanshu Sharma.

Second, the first half of the movie focuses on romance and is light. However, the second half devolves into an odd mix of romance, parody and sci-fi. These pieces do not come together and you wonder, how on Earth (pun not intended when you see this movie) did this movie end up where it did. The movie loses the “complete vs. incomplete” message that it wanted to tackle for each of its flawed characters. I think if the movie had focused on a more earthy, middle class romance between its lead characters, with dollops of comedy and emotions with a message, it really could have been a movie that audiences would walk out happy with. Also, the ending is so rushed and abrupt, that it is almost as if the writer had no idea what to do next. Certain characters, like Bauaa’s parents and Babita, disappear from the narrative in the climax and their role in the character’s graph then becomes increasingly questionable.

The movie makes you scratch your head and wonder, what the heck did you just watch? It is as if the movie was written with stream of consciousness and improv, as if they were thinking of inane things along the way and believing it would be cool or make sense. I really wonder whether the original concept of the movie is what is now on screen. The script is way too slow, does not have any path breaking components by way of plot, and reflects the early SRK melodramatic fare which people roll their eyes at now. Dialogues in the film are decent, with some very punchy and witty elements.

Rai as director has failed this time. His intentions were good and ambitious, but it did not translate well at all. Additionally, his editor failed him big time. This was the first time in a SRK movie where I was hoping it would end soon because it was too prolonged and too boring after a certain point.

I could give this movie a complete 0 (yes for the first time), but because of SRK and Katrina’s performance, I will give it a 1/5, the lowest rating I have ever given any movie. It is worse than Tubelight, Tees Maar Khan, and Joker. So you can imagine how bad it is. SRK please, Please, PLEASE take better stock of the movies you are doing. You have so many fans and you are putting them down. Let’s hope your next film, Saare Jahaan Se Accha, will be the catalyst to bring you back to being the star we admire. Mr. Rai, you can do better than this.

Folks, save your money on this. Don’t even watch this for free.

Film Review: “Thugs of Hindostan” may rob you of your money – depending on your mindset (November 9, 2018)